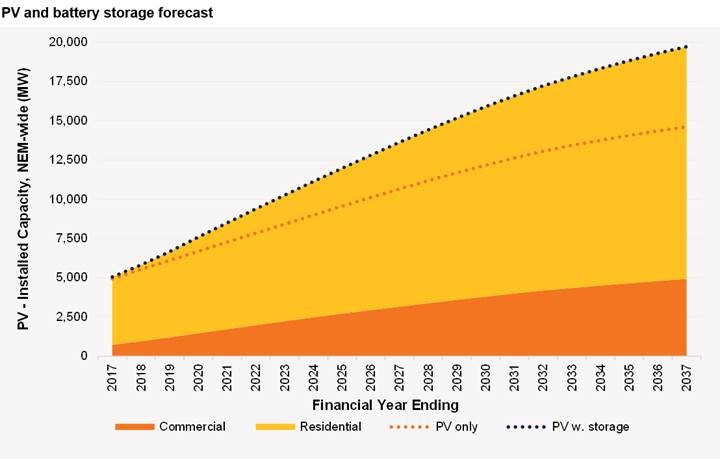 Regional forecasts generally share the national trends, with minor differences as highlighted below.

New South Wales has strong forecast growth in rooftop PV uptake, and is projected to become the region with the largest installed capacity (7.6 GW) by 2036–37. This is mainly because this region has the highest number of projected connections, as the percentage of households with PV is forecast to remain lower than in some other regions. Strong growth of PV installations coupled with battery storage is forecast, especially after 2019–20, driven mainly by expected declining battery costs.

South Australia currently has the highest penetration of residential rooftop PV of all the NEM regions. As a result, the region is forecast to reach saturation earlier than most others, causing forecast growth to decline towards the end of the outlook period before reaching a total 2.1 GW of rooftop PV capacity by 2036–37. Some of the projected decline in residential growth is expected to be offset by a higher projected uptake of commercial PV systems.

Tasmania continues to have slower forecast growth of PV installations compared to the other regions, in both the residential and commercial segments, because lower insolation (sunshine) levels make systems less financially attractive. Only 250 megawatts (MW) of capacity is forecast to be installed by 2036–37.

Residential PV uptake in Victoria is forecast to grow steadily until the mid-2020s. Projected uptake in the commercial sector remains steady across the outlook period, leading to a forecast total installed capacity of more than 4.3 GW by 2036–37.